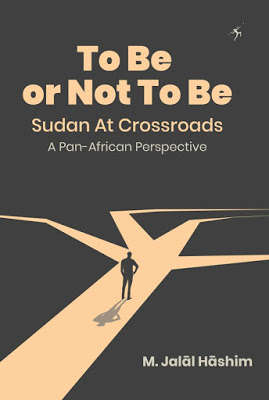 I have been an avid reader of the work of M. Jalal Hashim (MJH) for about a decade. This is the first time I read a book of his in English.

For me, as a Sudanese reader and writer, MJH has a firm place in a special, short list of critically important, contemporary Sudanese writers, due to his prolific and valuable record of publications, mostly in Arabic (with some papers and essays in English), addressing various topics from Sudan’s social history, to political theory, to cultural analysis and literary critique. I am elated that his well-thought and enduring theorization about the Sudanese predicament will be, at last, more accessible to English readers.

MJH establishes the realm of culture (defined holistically) as the basis of his proposal for understanding the problem(s) with post-colonial Sudan. A significant majority of the Sudanese people, MJH argues, suffer from a peculiar, chronic and severe cultural identity crisis. That crisis was a result of a cultural fallacy that emerged due to local peculiarities before colonization, amplified in the colonial era, and has been reproduced ever since. That continuous process works for the benefit of an elite, minority ‘centre’ through monopolization of power and wealth to the extreme disadvantage of the country’s majority populations on ‘the margins’. Both the centre and margins are defined objectively, in this thesis, on basis of power and wealth concentration, instead of fluid or arbitrary ethno-geographic definitions. The centre uses particular, valuable components of Sudan’s large multicultural mosaic, i.e. Islam (or ‘Islamdom’) and Arabic heritage, as ideological tools for reproducing itself, desecrating both components in the process while marginalizing all the other components simultaneously. This Islamo-Arab ideology desecrates both Islam and Arabic heritage by deforming both, from their natural state as genuine cultural components among several others in Sudan, to become tools of exclusion of “the others” from power and wealth. Hence, even as the two cultural components are not put on trial themselves, in this thesis, what is under scrutiny is how the centre manipulates them for its own interests.

In reality, the only logical and inclusive national identity for Sudan, capable of bringing its various cultural components in cohesion, connecting its magnificent and complex history to its present, and unlocking the potential of the people and the land, is the African identity, MJH argues. It is a general historical, social and political identity that is consistent with the objective realities in Sudan. It does not exclude anyone, and it opens broader cultural possibilities than any other proposed national identity. In that light, MJH proposes Pan-Africanism as a way for Sudanese intellectuals and social movements to reconnect with Africa and its nations.

MJH, and a few other Sudanese intellectuals who agree with him, assert that understanding the centre-margin conflict in Sudan illuminates the historical forces at work in the country and helps in resolving the crisis it creates, thereby ushering a way out of the vicious cycle of injustice, instability, war and underdevelopment.

MJH does an impressive job in making this book an accessible summary of his interesting and controversial thesis—his most significant contribution to Sudanese socio-political thought, from a Pan-Africanist perspective. This book is to be highly recommended for all those interested in making sense of the complex phenomenon that is contemporary Sudan/South Sudan.

——–
To Be or Not To Be: Sudan at Crossroads, published January 2019, is available online through the African Books Collective (africanbookscollective.com), as well as other online booksellers. In Tanzania and East Africa, it is available at TPH Bookshop, Dar es Salaam.
——–

“A most timely book, written with sensitivity, knowledge and forthrightness about the crisis of identity in the Sudan. It has an excellent background historical narrative pieced together with finesse and insight. It is the sort of text which will educate the wider public on what is happening in the Sudan in broad historical perspective.”
–Professor Kwesi Kwaa Prah (director of the Centre for Advanced Studies of African Society, Cape Town, South Africa)

“To Be Or Not To Be” by M. Jalal Hashim is a brilliant and provocative book on the misconfiguring nature of the Islamo-Arabo ideology on the indigenous African populations of Sudan. It is the book for which we have been waiting. There is perhaps no other scholar with the breadth of understanding, the historical inclination, or the knowledge of the debilitating ideological structures on the African populations, than Professor Hashim, who could have written this intelligent analysis. This book will become a much required contextual study for any Pan African, Afrocentric, or trans-generational examination of the history of African people.”
–Molefe Kete Asante (Professor and Chair, Africology, Temple University, Philadelphia author of The History of Africa)

“This book can unequivocally bring about the disillusionment of the Sudanese public with the erroneous beliefs they have about themselves. Beliefs that are so endemic, so deeply embedded in their psyche to even be recognized as false beliefs… What is needed is a grand awakening and this book holds the promise to do that in an unprecedented way… I can’t thank the author enough for producing this work which will definitely spark revolutionary discussions with my family members as I feel I am armed with an understanding I did not have before. I’m really looking forward to this book spreading like wildfire across the consciousness of my generation.”
–Azza Dirar (Sudanese PhD student at East Anglia University, UK)

“To be or not to be” is a tremendously rich analysis of linguistic, cultural, political, economic and social factors, which explains the intricate root causes of conflicts that have ravished Sudan. It stands in stark contrast to the dominant simplification and distortions which have come to typify presentations of the region… By highlighting the detrimental complexities of manipulation, geopolitics, identity confusion and cultural imperialism, Hashim has not only written an authoritative book about Sudan, but also presented a comprehensive case study that all of Afrika must learn from. Rarely are we presented with such a vigourous inside-view to an area of Afrika which once was held in the highest civilizational esteem…”
–Baba Buntu (Johannesburg, South Africa)